More Improvements We’d Like To See For The Switch 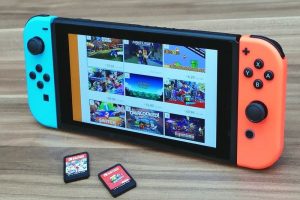 The past couple of months have seen a number of different changes revealed surrounding Nintendo’s popular Switch console. The Switch Mini was given plenty of exposure through a fairly big showcase, while another change – a passive power boost to all Switch consoles hitting the market from here on out – went surprisingly under the radar. Even with these two changes in effect though, there’s further room for the Switch to improve. So we thought we’d make some suggestions, just for fun.

When Nintendo announced that it would be offering its classic titles as bonuses for those who purchased Nintendo Switch Online subscriptions, gamers rejoiced at the idea of being able to take these classics on the go with them. What actually ended up happening was far less exciting, however; the offerings amounted to a paltry few NES games a month. These were titles that had been readily available for years prior through a variety of different means, including on the NES Classic from just a few years before. Meanwhile, after more than a year, there are still no signs of non-NES titles joining the lineup. At the very least, branching out to the SNES seems like a no-brainer, but honestly Nintendo could and should go even further by making N64 games available as well.

Branching Out to Other Gaming Types

Nintendo’s consoles have always hosted a variety of different types and genres of games, save one that always seems to get ignored in the console medium: casino gaming. Once marketed primarily to niche audiences, casino games have experienced a surge in popularity online that has all in all made them more relevant in pop culture. Poker gaming is exceptionally sophisticated at this point, and the UK’s production of new slot sites has effectively turned other casino games into something resembling more conventional video games. Now, it’s difficult to say exactly what form this sort of entertainment could take on the Switch, and real-money gaming almost certainly wouldn’t be an option. But whether it’s a fresh title featuring these types of games infused with popular Nintendo characters and settings, or it’s a licensed casino app alongside other apps accessible on the Switch, it would only expand the entertainm
ent potential of these devices.

One of the strongest aspects of Nintendo’s 3DS portable system was that it could be customized, inside and out. Not only did some 3DS devices come with exterior shells that could be designed according to preference, but users could even decorate the start-up menu itself with different badges and backgrounds. The Switch offers neither of these fun features, and has a relatively plain background and design (sleek and clean though it may be). We’d be surprised if this isn’t something Nintendo plans on introducing at some point in the near future, but in the meantime a bit more customization remains on the wish list.

Honestly, this gap in the Switch’s offerings has been somewhat baffling. The Wii and Wii U both had internet browsers that worked just fine. In fact, even the 3DS had one. The fact that Nintendo’s latest system, and the one that’s clearly meant to be the most evocative of a tablet, doesn’t have anything even resembling an internet browser means that it was an intentional choice on Nintendo’s part. Why? We have no idea. But an update adding one to the system would certainly go a long way toward making the Switch feel more complete.

Are you sure you want to delete team?